AN OUTLINE HISTORY OF PALEOLITHIC STUDIES IN MONGOLIA 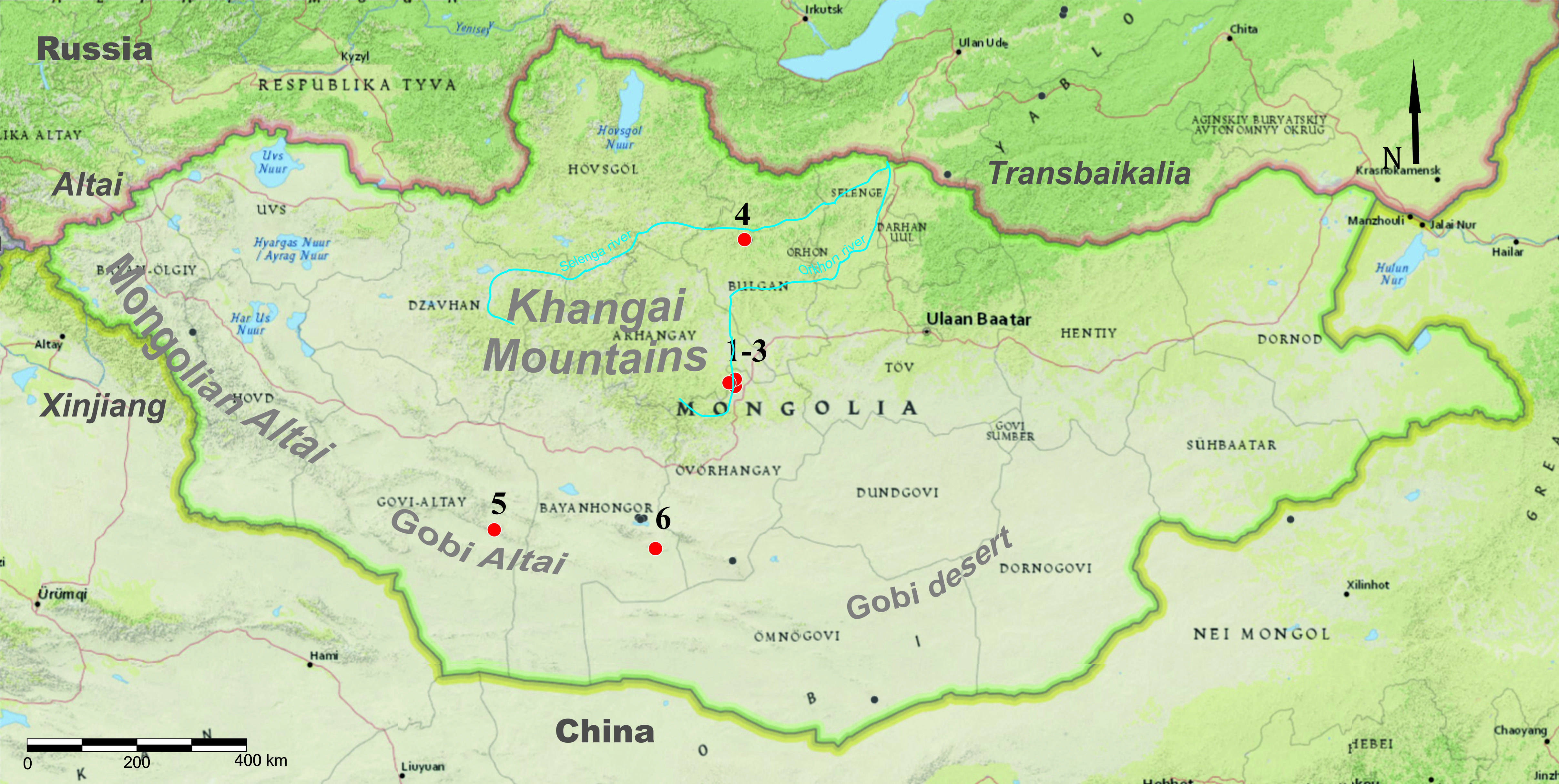 Mongolia occupies a crucial geographical position near the center of the East Asian land mass. Bordering Kazakhstan in the west, China on the west, south, and east, and Russian Siberia on the north, Mongolia’s geographical context helped define the region as a crossroads of prehistoric peoples and their cultures beginning in the Paleolithic.

In the early 20th century, two renowned American scientists, Henry Fairfield Osborn and William Diller Matthew, proposed Central Asia as the center of mammalian evolution, including that of humans and other primates; an idea which immediately generated interest in beginning paleontological field investigations in Mongolia.

The ideas of Osborn and Matthew not only aroused great discussion in scientific circles, they were also responsible, both directly and indirectly, for the initiation of field archaeological studies in North China, Inner Mongolia and Mongolia proper, known in those days as Outer Mongolia, directed toward the discovery of the remains of ancient humans and their cultures. In the 1910s and 1920s, this region was traversed by several large multidisciplinary expeditions, including those of the Japanese (headed by Torii Ryūzō), the Swedish (headed by Sven Hedin), and the British (led by Sir M. Aurel Stein), among others (Larichev 1969).

In 1916, the National Geological Survey of China was formed under the direction of Ding Wenjiang (V. K. Ting). This new organization focused its efforts on the study of China’s Tertiary and Quaternary geology and paleontology. A large number of European, Canadian, and American scientists participated in the Geological Survey’s activities, including A. W. Grabau, D. Black, J. G. Andersson, P. Teilhard de Chardin, and O. Zdansky, among others. Fruitful discoveries were made early in the 1920s by Teilhard and E. Licent in the Ordos Region (Hetao Diqu) of North China at the sites of Shuidonggou and Sjara-osso-gol (Salawusu). Here, for the first time in East Asia, excavations revealed stratified Paleolithic tools associated with the bones of extinct animals including Palaeoloxodon namadicus, woolly rhinoceros, antelope, ostrich, aurochs, and hyena (Teilhard and Licent 1924, 1925). Henry Fairfield Osborn proclaimed these discoveries made by French scholars to be the first major achievement in Central Asian Paleolithic studies (Osborn 1924, 1926, 1927).

The Central Asiatic Expeditions of the American Museum of Natural history were among the greatest scientific endeavors devoted to studies of this area during the first half of the 20th century. These multidisciplinary expeditions, fielded between 1922 and 1930, concentrated on the study of Mongolia’s geology, paleontology, and archaeology. The expeditions were formed at the behest of Osborn, and Roy Chapman Andrews was selected to head the expedition because of his rich experience in field investigations in East Asia. A number of outstanding scholars participated in the Central Asiatic Expeditions, among them geologists C. P. Berkey and F. K. Morris; paleontologists W. Granger, G. Olsen and A. Johnson; archaeologists N. Nelson and A. V. Pond; and the zoologist K. Pope. During five expeditions in 1922, 1923, 1925, 1928, and 1930, areas in both Inner and Outer Mongolia were investigated, resulting in then unparalleled contributions in geology and paleontology (Andrews 1926, Berkey and Morris 1927, Wallace 1994).

The expedition managed to locate Paleolithic remains during its first field season when, on 28 August 1922, geologists Berkey and Morris discovered several stone artifacts “of archaic appearance” near the Gurvan Saikhan range south of Arts Bogd Uul. Larger Paleolithic localities were later found near the lakes Kholobochi Nuur, Orok Nuur, and Tsagaan Nuur. Although the results of these archaeological investigations were never fully reported, Fairservis (1993) published a useful overview and summary.

Political instability in East Asia in the 1930s and 1940s effectively halted expeditionary work in Mongolia and adjacent territories until archaeological studies were resumed by the Soviet-Mongolian Expedition under the leadership of S. V. Kiselev. In 1949, a special Mongolian Stone Age research team was formed headed by A. P. Okladnikov, who managed in a single field season to complete a reconnaissance of a very large area bounded by Kyakhta on the Russian frontier in the north, Kharakhorin in the west, Choibalsan in the east and, in the southwest, portions of the Khalkin Gol Valley in the Gobi Desert (Okladnikov 1951).

In the 1950s, Mongolian scholars first became actively involved in the study of their own country’s Stone Age prehistory. Founding figures include H. Perlee, Ts. Dorjsuren, N. Ser-Ojav, O. Namnandorj, among others. In 1960, after a decade of indigenous Mongolian archaeological studies, Academician B. Shirendev, then President of the Mongolian Academy of Sciences, together with Academician Sh. Natsagdorj, then Director of the MAS Institute of History, suggested that archaeological studies of the Mongolian Stone Age should be conducted under the auspices of a joint Soviet-Mongolian expedition led by Academician Okladnikov. The Mongolian scholars, N. Ser-Ojav and D. Dorj, participated in these early joint expeditions. A  formal bilateral agreement on scientific collaboration agreed to by the academies of sciences of the USSR and Mongolia in 1969 included the organization of the Joint Soviet-Mongolian Historical and Cultural Expeditions and specified their two co-directors: for the Russian side, Academician A. P. Okladnikov (1969-1981) and, from 1983 on, Academician A. P. Derevianko.  Doctor of History, N. Ser-Ojav, directed the Mongolian contingent.

During the following two decades (the 1970s and 1980s) the Stone Age prehistory of many regions of Mongolia were investigated under the auspices of these joint expeditions. In some years, the expedition’s vehicles covered routes in excess of 10,000 kilometers. Approximately 300 prehistoric localities were discovered, supporting eventual publication of more than 200 scientific papers. Among these published works, those of Okladnikov (1981, 1986) are especially valuable in that they established a chronostratigraphic sequence for the Mongolian Stone Age that remains a useful interpretive framework today.

Taking into account the experience of previous investigations, in 1983 the decision was made to systematically investigate each of Mongolia’s major physical and geographical regions.  From 1983 to 1989, field investigations were carried out in the Mongolian and Gobi Altai ranges and in the Gobi Desert where special attention was focused on ancient river valleys and lake basins that were settled by prehistoric populations. While earlier expedition routes ran chiefly through Mongolia’s more densely settled regions, post-1983 field activities concentrated on more inaccessible regions which had not been studied previously. During the last seven years of the Joint Expedition, more than 700 Stone Age localities were discovered, including 30 attributable to the Early Paleolithic.

Well-stratified open-air and cave sites were the focus of study, and excavations were carried out at the sites of Orkhon, Tsagaan Agui Cave and other localities over several years. A vast amount of unique material comprising several hundred thousand artifacts was obtained during that period. However, due to practical considerations (the inaccessibility of some areas, limitations of time), many of Mongolia’s ancient river valleys were only cursorily studied. The Expedition was not charged with the task of revealing all of Mongolia’s Stone Age localities, and in some regions of especially abundant Stone Age sites (e.g. in the Baydarag Gol, Bondonchin Gol, and Nariyn Gol valleys, the Arts Bogd, and Baga Bogd or Zuun Bogd ranges, and others) only a limited number of localities were investigated. At many sites exhibiting particularly dense concentrations of artifacts, only partial, representative samples were taken. 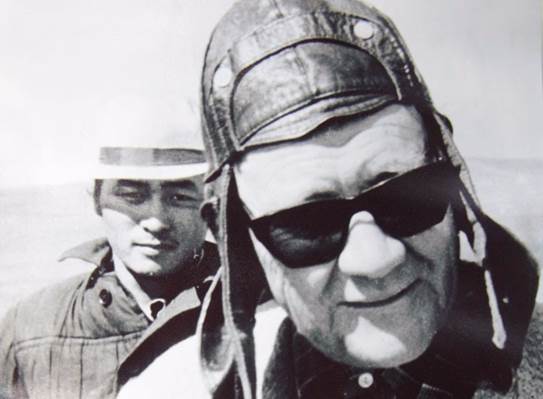 The prehistoric investigations carried out in western and southwestern Mongolia paralleled long-term excavations conducted at more than ten multicomponent, well-stratified open-air and cave sites in the Russian Altai Mountains which, along with the Mongolian and Gobi Altai massifs, form a single, continuous orographic system. Beginning in 1993, collaborative research has also been carried out with Kazakh colleagues in south Kazakhstan. These investigations in Mongolia, the Russian Altai, and Kazakhstan enable researchers to reveal similarities in occupation of these regions by prehistoric peoples, to trace routes of migrations of ancient populations, and to detect dynamics in the development of Paleolithic industries over a broad chronological range. Specialists representing a wide variety of disciplines continue to participate in these field and laboratory studies, including archaeologists, geologists, geomorphologists, paleogeographers, palynologists, and paleontologists, among others, permitting us to examine a principal unifying theme, Pleistocene paleoecology, in close association with the dynamics of Paleolithic industries as reflections of culture change associated with these ancient populations.

Due to changes in the USSR’s political and economic situation, field investigations conducted by Russian researchers in Mongolia ceased in 1989. Negotiations aimed at forming a joint trilateral archaeological expedition to study Mongolia’s Stone Age prehistory were initiated in 1994 by Professor J. W. Olsen on the American side and by Academician A. P. Derevianko on the Russian side. Their initiative was supported by the President of the Mongolian Academy of Sciences, Academician D. Baatar and the Director of the MAS Institute of History, Professor A. Ochir. On 15 June 1995, an agreement specifying the creation of the Joint Mongolian-Russian-American Archaeological Expedition (JMRAAE) with an initial term of five years (1995-1999) was signed in Ulaanbaatar by representatives of the Institute of Archaeology and Ethnography of the Siberian Branch of the Russian Academy of Sciences, the Department of Anthropology of the University of Arizona, and the Institute of History of the Mongolian Academy of Sciences.

The creation of this joint trilateral expedition was a logical extension of the 70-year history of Paleolithic studies in Mongolia. The balanced, collaborative efforts of scientists from all three countries provided the opportunity to conduct complex, long-term excavations of stratified localities, to search for new quarry sites, workshops and settlements, and to combine the efforts of a wide range of experts undertaking subsequent laboratory analyses.

Russian team on the way to Mongolia

Paleolithic sites in the arid zones of Central Eurasia are of a specific character: many localities are mixed surface aggregates; palimpsests of human behavior. The thorough investigation of sites in clearly stratified contexts is required in order to establish the dynamics and chronology of Paleolithic industries in this complex region.

The primary goals of the Joint Mongolian-Russian-American Archaeological Expeditions have been, from its inception in 1995:

1.  To elaborate the chronostratigraphic sequence of the Mongolian Paleolithic based on the excavation of stratified open-air and cave sites.

2.  To systematize the tremendous amount of artifacts discovered during the last 90 years at more than 1000 Stone Age localities in Mongolia by means of standardized techno-typological classification of industries derived from stratified contexts.

3.  To investigate localities varying in type and depositional history in order to create standard techno-typological patterns of Early, Middle and Late Paleolithic industries and to trace the development of primary flaking strategies and principal categories of stone tools over the course of several hundreds of thousands of years in Mongolia.

4.  To employ an interdisciplinary approach combining the efforts of experts from many natural and physical sciences to reconstruct in detail the paleoenvironmental conditions and paleoeconomies of Pleistocene Mongolia.

5.  To trace the main routes of migration of prehistoric populations through Central Asia and contiguous regions.

Resolution of these problems, of course, require collaborative research conducted over many years.

During the Expedition’s first (1995) field season, the main goals were to continue the excavation of Tsagaan Agui Cave (discovered in 1987 and subsequently investigated in 1988 and 1989; see Derevianko and Petrin 1995) and to search for new Stone Age localities, principally in Bayankhongor, Övörkhangai, and Ömnögov’ aimags.

The Expedition’s base camp was established near Tsagaan Agui Cave and, in addition to the excavations conducted there, a series of four reconnaissance trips were undertaken, resulting in the discovery of 19 additional open-air Paleolithic localities.

Participants in the Joint Mongolian-Russian-American Archaeological Expedition in 1995:

Russian participants in the 1995 expedition:

B. A. Abramov – Artist and Photographer, IAE, SB, RAS.

American participants in the 1995 expedition:

Mongolian participants in the 1995 expedition: